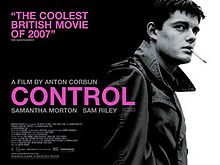 Every now and then, a musical biopic gets released. The more notable examples (and subjects) include Walk the Line (Johnny Cash), Ray (Ray Charles) and The Doors (Jim Morrison).

Control is about Joy Division frontman Ian Curtis. Both names aren't as well known today but back in the late 70's, both were some of the biggest names in the music world. Ian is portrayed by Sam Riley, and he's great in this. He has this little boy lost look on his face, mostly because everything has happened to him so suddenly. His marriage, the success, all occurred when he was still young.

One scene I really liked was when Ian is confronted by his wife Debbie (the always great Samantha Morton) about his affair. She voices her opinion on the matter, but he remains quiet. It isn't until after she leaves the room that Ian falls apart. He tells Debbie that he loves her, and I love Debbie's response: "What does that mean?" Cold but honest.

Control is such a great movie. Anton Corbijn, a photographer before becoming a director, makes this appear as though he's been making movies for years rather than for the first time. Control looks like a living photograph, chronicling the struggles of a man whose life slowly consumed him.

My Rating: *****
Posted by MovieNut14 at 2:46:00 PM
Email ThisBlogThis!Share to TwitterShare to FacebookShare to Pinterest
Labels: 2000s, movies, reviews