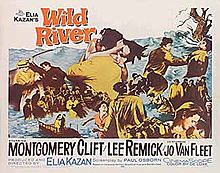 It's really sad that after his near-fatal car crash, studios were more than hesitant to cast Montgomery Clift in their projects. It wasn't just because his good looks were destroyed, but his mental state was as well.

Elia Kazan trusted Clift enough to cast him in Wild River. After all, Kazan had previously worked with Method acting pioneers Marlon Brando and James Dean, but Clift was different both acting-wise and mentally. Clift had a slow simmering type of acting, which he showcases in Wild River.

Wild River also stars Lee Remick, whom I also like. She is someone who I dub an "underactor" meaning her performances are so subtle and nuanced, they feel more like she's being herself rather than acting. Her work in Wild River is such an example.

Although the title implies otherwise, Wild River gets on the slow side more than once. It's a good movie, but I wouldn't generally rank it among On the Waterfront, A Streetcar Named Desire or A Face in the Crowd. I will say, however, that Clift and Remick some fine work.