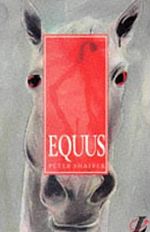 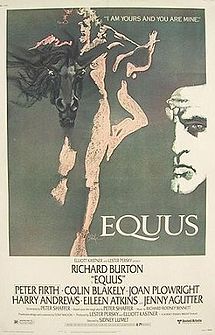 It's hard to read a play and see its film version. It generally only works if you've seen the play on Broadway, then see the movie. However, there are several directors who can make a production go from stage to screen with ease.

One of them is Sidney Lumet. His adaptations of Long Day's Journey into Night and Orpheus Descending (the movie was renamed The Fugitive Kind) both possess the original plays' flow, just as Eugene O'Neill and Tennessee Williams wanted.

Lumet's adaptation of Peter Shaffer's Equus is not only faithful to the play, it also stars Richard Burton and Peter Firth (both starred in stage productions of Equus). Both reprise their stage roles and they do it in a high caliber.

One notable difference between the play and the movie is that in the movie, Dysart is more self-loathing. He is unsatisfied with how his life panned out, his job has lost meaning, and his marriage is dead in the water. And Burton, a self-loathing figure himself, captures Dysart's frustrations perfectly.

Lumet's take on Shaffer's play is quite good, but it drags a bit halfway through. Fortunately, it picks up in time for the startling climax (which reminded me of the one in Suddenly, Last Summer).

What's worth checking out?: I'd go with the book.
Posted by MovieNut14 at 6:48:00 PM
Email ThisBlogThis!Share to TwitterShare to FacebookShare to Pinterest
Labels: book vs. movie, director: Sidney Lumet, plays, reviews