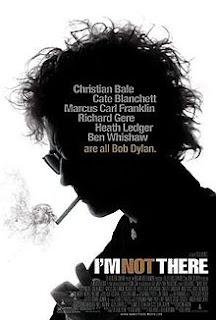 The cast for I'm Not There is impressive. Among the actors portraying Bob Dylan's personas include Heath Ledger, Cate Blanchett, Christian Bale, Ben Whishaw and Richard Gere. Of them, I liked Ledger and Blanchett the most. They capture the right portrayal of aloofness towards society. It doesn't mean they're self-absorbed; they just don't care.

I'm Not There is quite good, but it feels disoriented. It jumps from different time periods frequently, so it feels hard to follow sometimes. That said, I thought it was very well-acted. But all in all, it's mostly style over substance.