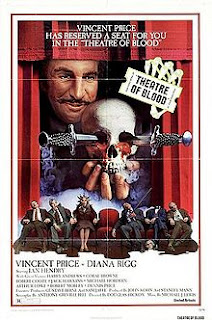 Most horror movies that are dubbed underseen are usually not very good. That doesn't mean they're all bad.

Vincent Price is noted for his appearances as the villain in movies. (That voice of his might be a contribution to it.) In Theater of Blood, he's somewhat of a sympathetic sort of person. After all, his Edward Lionheart is merely getting revenge on the critics who mocked his career.

What makes Theater of Blood clever is what the inspirations for the murders are from. Lionheart is a Shakespeare actor, so naturally he would use scenes from the Bard's work. Makes a person wonder if Andrew Kevin Walker watched this a few times before he wrote Se7en.

Theater of Blood is one of the more clever horror movies out there. Price is his usual diabolical self, but he shows more range with this. If you ask me, it's really worth checking out for its entertainment and shock value.

My Rating: ****1/2
Posted by MovieNut14 at 3:55:00 PM
Email ThisBlogThis!Share to TwitterShare to FacebookShare to Pinterest
Labels: 1970s, movies, reviews