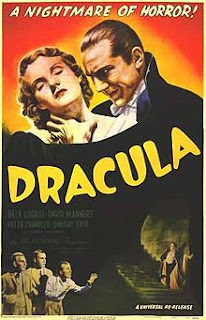 To most horror movie fans, the 1930's marked the starting point of the genre. That's definitely true if you consider the the titles released from that time period.

On of them is Dracula. No denying that Bela Lugosi is one freaky vampire. The Hungarian accent and that look in his eyes prove that. Seriously, try not to get spooked out by his close-up with that beam of light over his eyes.

One aspect of Dracula I like is the lack of music. Most horror movies use music to build up suspense. (Psycho, anyone?) I think the absence of music makes it more suspenseful than if there was music, but that's just me.

Dracula is very good but considering the number of horror movies I've seen prior to this, the scare factor was relatively low. Still, Lugosi is a spooky vampire. Take that, Twilight.