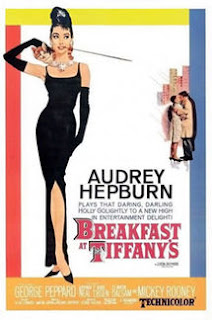 When a movie achieves iconic status, now and then it's clear as to why they're so iconic just from first glance. Other times, you need to watch the movie to understand why.

Take for example Blake Edwards' Breakfast at Tiffany's. It's mainly iconic for the style and glamour Audrey Hepburn displays but underneath all the glitz, it's a much darker tale. It isn't just a love story; it's about a woman's hopes to become something big.

Throughout Breakfast at Tiffany's, we find out more about Holly Golightly (Hepburn) and her past. Holly is different from other Hepburn roles because she's more self-absorbed. She only has hopes of marrying someone rich. She's not interested in feelings. At least until Paul Varjak (George Peppard) shows up.

Breakfast at Tiffany's is pretty good, though I think it's a tad overrated. I mean, as I mentioned, it's considered a love story when it's more than that. Performance wise, I liked Hepburn but I really liked Patricia Neal. (If you're wondering, yes, I found Mickey Rooney's role offensive.) In short, I liked it but not as much as most everyone else does.