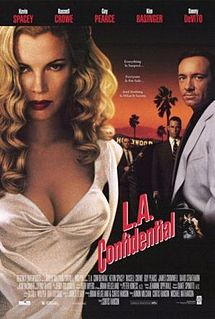 Crime movies are always the best, especially if they're set in Los Angeles. It's always a thrill to see the police solve a case, but what if the police were hiding something behind the badge?

Curtis Hanson's L.A. Confidential provides a great glimpse of police corruption. We commonly see in other movies cops acting above the law, but L.A. Confidential shows that it isn't one or two cops; it's almost the whole damn department! And Hanson makes sure that he doesn't cram that fact down our throats but rather acknowledges it periodically.

The cast is just to die for. Russell Crowe channels his inner Bogart by saying more with his expressions than with his words and actions. Guy Pearce is the straight-laced cop who tries to clean up the department (and makes more than a few enemies), but he gets tempted more than once to switch over. Kevin Spacey arrests celebrities for his own fame and to provide material for Danny DeVito, but starts to feel guilty for what he's doing. Kim Basinger brings out the shreds of humanity in Crowe. All in all, they play their parts wonderfully.