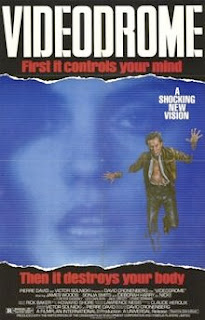 Considering the only David Cronenberg movies I've seen were some of his more realistic titles (Eastern Promises, Spider, A History of Violence), I was bound to see his movies from the 1980's sooner or later.

One of them is Videodrome. I've heard that this was a really messed-up movie and boy, is it ever. I knew Cronenberg's movies from the 1980's were...different from his more recent work, and Videodrome is just downright bizarre.

Though Videodrome shows the influence television can have on people. As most people know, the media is a contributor to most crimes. Cronenberg is making a statement on the influence of television and its impact. (It's not pretty in the least bit.)

Videodrome is good, but it was too surreal for me to really like. I do like Cronenberg's take on media influence however. It's basically one of the strangest movies out there. After seeing this, it'll make you think twice before watching television, especially late at night.