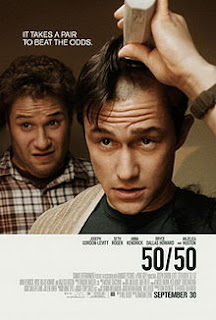 Cancer has always been a touchy subject. Millions of people have either lost their lives or a family member to it. (I lost an uncle to it last year.)

Of course, movies revolving around cancer are usually the ones you find on Lifetime that have the character stricken with the disease crying for most of the movie and yelling out "Why me?" That's what makes Joseph Gordon-Levitt in 50/50 stand out from the rest. He accepts the news of having a rare form of spinal cancer, works in his chemotherapy treatments and therapy sessions, and goes on with his usual routine. Of course, everyone else doesn't take the news so easily. (His mother's (Anjelica Huston) response: "I'm moving in.")

Another factor that makes 50/50 stand out is that it's a comedy. Now you're probably thinking a comedy about cancer sounds like the worst idea ever, but allow me to explain. It has the right balance of comedy and drama, not overdoing either one. Only a few movies can pull that off; 50/50 is one of them.

50/50 is one of this year's best. Instead of being tasteless, it has a heart. I would be happy if Gordon-Levitt and Anna Kendrick got recognized for their work. Oh, and just as a warning, you might cry from this, either from laughter, tears or both.

My Rating: *****
Posted by MovieNut14 at 9:47:00 AM
Email ThisBlogThis!Share to TwitterShare to FacebookShare to Pinterest
Labels: 2010s, movies, reviews