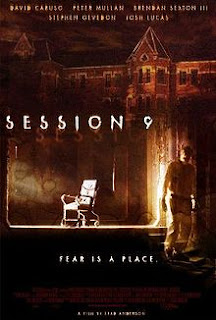 Paranoia movies are always the scariest kind of horror movies. When the main character slowly starts going insane, so does the viewer. (This is from someone who has seen one too many episodes of The Twilight Zone.)

Session 9, however, isn't one one of those movies. It tries to be like The Shining, but it tries too hard. I give Brad Anderson points for the build-up, but he loses those points (among other things) in the long run.

Of course Session 9 has the usual list of horror movie cliches: abandoned mental hospital, checkered past of said hospital, those sort of things. If Anderson wanted to present a new type of horror movie, ditch the cliches and do something unconventional. Seriously, it's not that hard.

If I wasn't clear enough, Session 9 tries too much to be something new and instead becomes the typical forgotten horror movie. It's all right in some parts, but it falls flat on its face by the end. I wasn't impressed.

My Rating: ***1/2
Posted by MovieNut14 at 3:37:00 PM
Email ThisBlogThis!Share to TwitterShare to FacebookShare to Pinterest
Labels: 2000s, movies, reviews