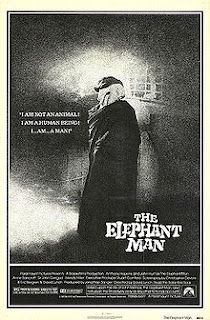 It's funny once you think of it. David Lynch is renowned for making freaky movies, and one of his earliest movies was about one of the most famous circus freaks in history.

I'm of course referring to The Elephant Man. Lynch doesn't portray Joseph "John" Merrick (John Hurt) as a freak of nature but more as a being confusing the rest of society. When people first see Merrick, their response is usually that of shock. (Frederick Treves' (Anthony Hopkins) reaction to first seeing Merrick is my favorite shot in the whole film.) But they don't know what Merrick feels.

That's what makes Lynch an interesting director to watch. He is willing to explore a certain character to many extents. But he also doesn't make us completely sympathize for Merrick. He has us come to terms with our own differences with Merrick's deformity.

The Elephant Man has all of these subtle notes, it just works perfectly. Hurt plays his part wonderfully, as does Hopkins (who should have been nominated as well). If you don't feel any pangs of emotion from any scene, you are a heartless robot.