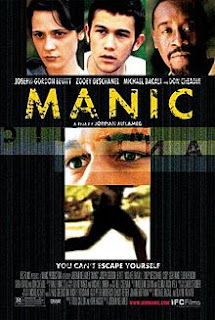 When exploring an actor's filmography, you come across stinkers and gems. I try hard to see more in the latter category. (Believe me, it's a lot easier if it's a good actor.)

Manic stars Joseph Gordon-Levitt and Don Cheadle, two actors I find some of the best in recent years. In Manic, they play men conflicted with their present situations. Cheadle is supposed to be in charge and keep everything under control, but he finds it too overwhelming for him to handle.

The star of Manic is clearly Gordon-Levitt. He acts mostly with his eyes, but his actions are just as powerful. He also has a murderous glint in his eyes more than once throughout Manic. It has to be one of his best performances.

Although Gordon-Levitt and Cheadle are the buoys for Manic, they can't stop it from sinking. The camera work is too jumpy and the same can be said about the plot. Neither are content to staying put. Personally, this is an "enter at your own risk" kind of movie, and I don't mean that in a good sense.

My Rating: ***1/2
Posted by MovieNut14 at 7:17:00 PM
Email ThisBlogThis!Share to TwitterShare to FacebookShare to Pinterest
Labels: 2000s, movies, reviews