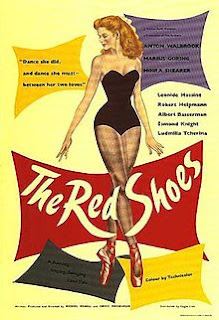 Another noted cinematographer is Jack Cardiff, who is mostly associated with Michael Powell and Emeric Pressburger. (For good reason, too.) He shows his skill to the highest caliber with The Red Shoes. He uses color flawlessly throughout, whether it be the sets of the ballets or the costumes (including the title red shoes).

Even if you're not a fan of ballet, you're bound to like The Red Shoes. It's not just about ballet but also about human emotion (mainly those Moira Shearer and Anton Walbrook). Who else but Powell and Pressburger could do this masterfully?

The Red Shoes is visually and emotionally beautiful. Every small detail works wonderfully together. Shearer and Walbrook are excellent in their performances. This is definitely not one to miss.

My Rating: *****
Posted by MovieNut14 at 9:25:00 AM
Email ThisBlogThis!Share to TwitterShare to FacebookShare to Pinterest
Labels: 1940s, director: Powell and Pressburger, movies, reviews