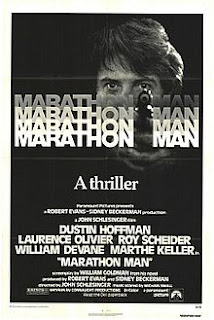 There are a number of movies that are famous for one scene. Examples include the kiss on the beach in From Here to Eternity, the shower scene in Psycho, and the subway grate moment in The Seven Year Itch. Sometimes, however, there's more to the movie than that one scene.

Of course for Marathon Man, the (in)famous scene in question is where Laurence Olivier tortures Dustin Hoffman through dental work. (His "Is it safe?" is just flat out unnerving.) Because of this one scene, I shall now be forever cautious of going to the dentist.

The scenes of dental distress aside, Marathon Man is a very well-acted thriller. Hoffman goes from unknown resident of New York City to victim to defender within the span of two hours. Roy Scheider makes it clear that he isn't what he seems. But this show belongs to Olivier. He is perhaps the most horrifying Nazi preceding Ralph Fiennes in Schindler's List. When you hear the name Christian Szell, run for your life.

Marathon Man is very good. It has a few flaws here and there, but the work from Hoffman, Scheider and Olivier gives the movie support. It has an accurate balance of thrills, so I recommend it mostly for that and the acting.