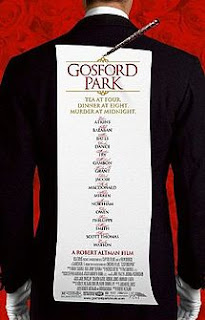 I know Robert Altman is a good director. It's just I haven't seen much of his work. I only have three titles to brag about seeing (MASH, The Player, The Long Goodbye).

There is also a fourth title among Altman's work that I've seen. That title is Gosford Park. It stars so many British actors, Ian McKellen joked that he was the only British actor not in Gosford Park. (Not kidding on that.) And boy, do they play their roles well. Of the actors, I liked Maggie Smith, Helen Mirren, Clive Owen and Ryan Phillippe the best.

The highlight of Gosford Park is Julian Fellowes' script. It practically oozes sly humor and wit. It picks up the dull parts. (There are quite a few, trust me.) You tell by the script that this is an Altman movie.

In total, I really liked Gosford Park but I thought it was sluggish in parts. Like many of Altman's previous movies, the ensemble of actors is excellently crafted. If you like heavily British movies, then you'll like this.