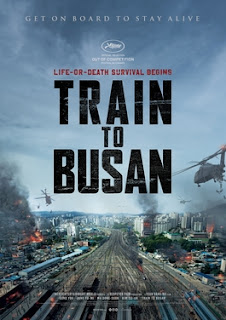 We've gotten a barrage of zombie movies ever since George A. Romero made it big with Night of the Living Dead. There's been those of varying qualities, certainly, but they incite thrills and entertainment regardless.

So where does Yeon Sang-ho's Train to Busan rank? It has a few elements found in recent zombie pictures (fast-moving creatures, survival of the fittest) but there's something else to it that makes it stand out. But what?

In the years since Night of the Living Dead and Shaun of the Dead, how does one present a subgenre of horror movies that's been -- excuse the pun -- beaten to death? But miraculously Yeon uses those expected tropes and revitalizes them. (Oh, and it's one of those zombie pictures so you've been warned.)

What Yeon does with Train to Busan is actually similar to what Edgar Wright did with Shaun of the Dead. (Come to think of it, that would make for a solid double feature.) It has attentive detail to the story's execution, using call backs effectively throughout its duration. (Certainly not something you'd find in pictures from Hollywood nowadays.)

Train to Busan could've easily followed the usual tropes associated with this type of picture but Yeon tries his damnedest not to do that. It doesn't always work some of the time but as a whole it stays consistent. It's true that a genre picture seldom works amongst a mixed audience but sometimes those few titles do stand out.

My Rating: ****1/2
Posted by MovieNut14 at 12:14:00 PM
Email ThisBlogThis!Share to TwitterShare to FacebookShare to Pinterest
Labels: 2010s, movies, reviews