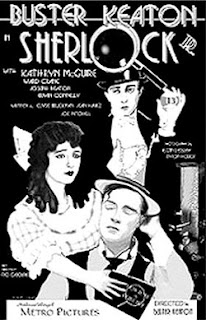 There are many comedians of the silent film era but when discussing who among them is the best, it always boils down to two names: Charlie Chaplin and Buster Keaton. Is it primarily because their works are are more prominent? Either way, it's their films everyone remembers more.

Now with Keaton's Sherlock Jr., it doesn't take much to see why he's so revered all these years later. Made at the height of his fame, it predated The Purple Rose of Cairo by several decades with its main storytelling aspect. But of course Woody Allen is no match to Keaton. (Let's be honest, no one is.)

Back to Keaton for a moment. He was someone who was willing to put his own neck on the line for the sake of others' entertainment. Here in Sherlock Jr., he does that in a literal sense. (There's one stunt that resulted in his neck being fractured, something Keaton didn't know until many years after the fact.) It's a miracle he lived as long as he did.

But also of note in Sherlock Jr. is how many of its shots are framed. Much like what he would do with The General two years later, Keaton utilizes the techniques of the time and puts them to good use. And as seen with his other films, it works.

Sherlock Jr. is a Keaton film through and through. Featuring many traits of his noted works, it also serves as a tribute to movies themselves. Because after all, who doesn't go to the movies to escape from reality and broaden their imagination? (It's been happening for decades, and there's no sign of that stopping anytime soon.)

My Rating: *****
Posted by MovieNut14 at 9:59:00 AM
Email ThisBlogThis!Share to TwitterShare to FacebookShare to Pinterest
Labels: 1920s, director: Buster Keaton, movies, reviews