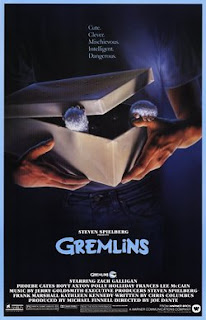 Ah, Christmas. A time of joy and togetherness. What's a better setting for a less-than-festive film than that? (Ah, the beauty of contrast.)

Joe Dante's Gremlins is the prime example of such a film. It has those many elements commonly found in those Steven Spielberg-produced titles of the 1980s. But does it stand up all these years (and many imitators) later?

In the thirty-two years of the film's existence, Gremlins has become as much of a Christmas tradition as It's a Wonderful Life. But boy, Dante is no Frank Capra. Gone are the heartwarming moments immortalized by the earlier film; here, they're substituted with hair-raising ones.

And as one watches Gremlins, they may wonder how in the hell this got away with a PG rating. Bear in mind this was before PG-13 was even an option (unsurprisingly it became one following this) so there must've been a whole generation of scarred children as a result. (As if Poltergeist didn't inflict enough damage two years prior...)

Gremlins is proof that Hollywood certainly didn't seem to care about the well-being of children following the emergence of New Hollywood. (Honestly, any random title from the previous decade slapped with a PG rating can attest to this.) But boy, you can see almost immediately why there were imitators not long after its release.

Posted by MovieNut14 at 10:32:00 AM
Email ThisBlogThis!Share to TwitterShare to FacebookShare to Pinterest
Labels: 1980s, movies, reviews