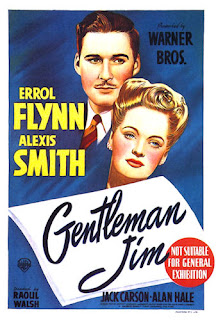 In the span of just a few years, Errol Flynn went from a complete unknown hailing from Australia to one of the biggest box-office draws in Hollywood. But after playing the swashbuckler who knows how many times, he wanted to show his audiences there was more to him.

One of the results was Raoul Walsh's Gentleman Jim where Flynn plays boxer James J. Corbett. Yes, he has the same amount of charisma he had for his collaborations with Olivia de Havilland but there's something more to Flynn's work here. (Could it actually be acting?)

Of course with this being a film about boxing, Gentleman Jim requires a lot of physicality from its leading man. And since he wanted realism, Flynn did his own stunts. Such exertion from him caused concern from leading lady Alexis Smith -- who was fully aware of Flynn's nights of debauchery -- but Flynn said thusly: "I'm only interested in this half. I don't care for the future." (Worth mentioning that Flynn had a minor heart attack during production.)

But as shown the previous year with They Died With Their Boots On, Walsh utilizes the talent within Flynn, something Michael Curtiz seldom tried to do with the leading man. It's no surprise that Flynn much preferred working with Walsh over Curtiz.

Gentleman Jim is a showcase for Flynn's talent, proving there was more to him than as the dashing leading man. It's almost a shame that Hollywood didn't give him more opportunities. But as least he got those few fleeting moments as a serious actor.

My Rating: ****
Posted by MovieNut14 at 10:10:00 AM
Email ThisBlogThis!Share to TwitterShare to FacebookShare to Pinterest
Labels: 1940s, director: Raoul Walsh, movies, reviews