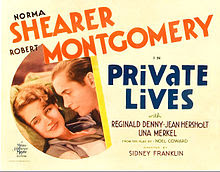 Love and marriage, love and marriage...go together like a horse and carriage... Or at least that's how the song goes. If fiction has shown us anything, it's nothing more than a union of a tempestuous nature. (Because -- at least according to Hollywood -- stable marriages are boring.)

And boy, there is never a dull moment in Sidney Franklin's Private Lives. (Being based on a Noël Coward play certainly helps.) Despite being divorced and newly married to other people, Amanda Payne (Norma Shearer) and Elyot Chase (Robert Montgomery) find themselves in each other's arms. That said, they argue more than enjoy the other's company.

This being a pre-Code title, there's decidedly a more lax attitude in Private Lives towards infidelity. (After all, Shearer did The Divorcee just the previous year.) As shown with other films from this brief era, it has an "I don't give a damn" attitude essentially from the get-go. (Even films today aren't as brazen.)

Shearer and Montgomery were frequent collaborators (Private Lives was their fourth of five films), and it's very clear that they were comfortable with each other. And boy, does ti come to a head here. There are enough sparks and hair flying between them to warrant a safety hazard.

Private Lives shows that they just don't make 'em like they used to anymore. Shearer and Montgomery solidify their worth in their respective Hollywood era which -- as they would show with later roles -- proved that they were more than willing to break free from their glamorous typecasting. After all, the line between elegant and ugly was regularly blurred then.

My Rating: *****
Posted by MovieNut14 at 2:23:00 PM
Email ThisBlogThis!Share to TwitterShare to FacebookShare to Pinterest
Labels: 1930s, movies, reviews