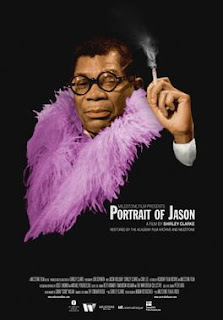 Shirley Clarke's Portrait of Jason isn't the conventional type of documentary. Its subject Jason Holliday (née Aaron Payne) isn't a name very well known by the masses but he's an engaging figure to watch as he tells his life story and ambitions. But is it as simple as that?

What's shown in Portrait of Jason could easily be described as that from the first few minutes but it unravels into something much more than that. Being made during a time where race and sexual identity were regular points of discussion (it certainly wasn't always), Clarke depicts an unbiased glimpse into someone's own life and how they see the world around them.

A key aspect throughout Portrait of Jason is how Jason presents himself to the camera. He has a flamboyant nature to him, a telling detail since he wants to be an entertainer. But as the film wears on, the barriers he had put up start to fall down. Off-camera taunts from Clarke and her then-partner Carl Lee reveal who Jason actually by film's end.

Being released the same year as Bonnie and Clyde and The Graduate, Portrait of Jason came out at a time when Hollywood was changing the rules. No more were the storytellers going to play it safe and get by with the occasional stray innuendo. But 1967 was the year that marked a cinematic revolution.

Portrait of Jason showed that women may have gotten the short end of the stick in previous years but they sure as hell weren't going to be in that position any longer. As Dorothy Arzner and Ida Lupino did before her, Clarke shows there's much more to storytelling than the then-required romantic subplot. They showed that a new perspective can be a good thing.

My Rating: ****1/2
Posted by MovieNut14 at 11:22:00 AM
Email ThisBlogThis!Share to TwitterShare to FacebookShare to Pinterest
Labels: 1960s, directed by women, documentaries, reviews