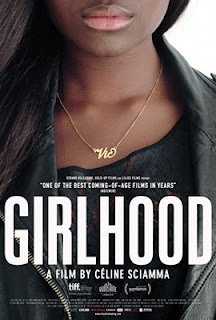 There's only a small handful of coming-of-age films that revolve around girls. We've seen enough stories of boys discovering the sordid world around them and how their bodies are changing. Just because the film industry is a male-dominated one doesn't mean those are the only stories that should be churned out.

Céline Sciamma's Girlhood is one of several recent titles to have girls at the forefront. Admittedly it follows the familiar "good girl gone bad" storyline but Sciamma does something different with it. But what exactly?

Girlhood follows Marieme (Karidja Touré) as she tries to find some meaning in her young life. Sciamma offers a more realistic depiction of how teenage girls interact. (Take that, male screenwriters!) After all, everyone doesn't communicate with different people the same way.

As she showed with her previous film Tomboy, Sciamma provides an unbiased portrait of how the protagonist lives their life. It's one of various ups and downs, one of good days and bad. (But isn't that life in general?)

Girlhood proves that Sciamma certainly knows how to capture the coming-of-age story. It's not always the type of story that's clean-cut nor is it one that everyone captures easily. But as she showed with Tomboy and this, Sciamma shows that she can depict the woes of youth. (Beat that, John Hughes.)

My Rating: ****1/2
Posted by MovieNut14 at 11:37:00 AM
Email ThisBlogThis!Share to TwitterShare to FacebookShare to Pinterest
Labels: 2010s, directed by women, director: Céline Sciamma, movies, reviews