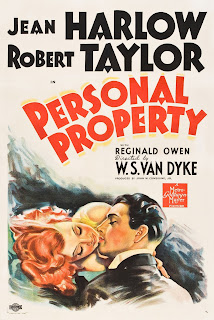 It's a shame that Jean Harlow left this world at such a young age. Who knows what her career would've been like had she not died at twenty-six? Would she still be held in the same regard as she is now?

Ergo there's a certain sadness when watching her in W.S. Van Dyke's Personal Property, the last film of Harlow's to be released during her lifetime. She has a quick wit about her throughout the film, especially aided when she banters with co-star Robert Taylor. (Had she lived long enough, they probably would've gone on to have a film partnership like William Powell -- Harlow's fiance -- and Myrna Loy.)

A remake of The Man in Possession from six years earlier, Personal Property is a comedy of manners, something that comes to a head during a dinner party hosted by Crystal (Harlow). Her guests become oblivious to the thinly-veiled insults thrown about. (Worth mentioning that some of the guests are part of Raymond's (Taylor) family.) To watch Crystal and Raymond being in on the joke adds to the humor.

Back to the stars for a moment. Throughout his career, Taylor tended to get overshadowed by his leading ladies (Camille, Three Comrades, Waterloo Bridge) but with Personal Property, he and Harlow share the screen gracefully. It's not that often both then and now where the leading man and lady's chemistry compliments one another. (Then again, this perhaps isn't much of a surprise considering Van Dyke made The Thin Man a few years earlier.)

Personal Property is a joy to watch but again, knowing what happened to Harlow that same year leaves many "what could have been" scenarios as a result. Still, her rapport with Taylor will have you happy that her short time alive is still beloved today.