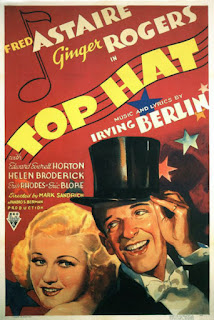 Ah, mistaken identity: sheer fodder for comedy. It could fall into grating territory for those not patient with such a plot. But if it's done properly, it can lead to something good.

Top Hat was the fourth of ten films Astaire and Rogers did together bit it's easily the best-known of their collaboration. It has a buoyant almost slapstick air to it, certainly not something one would expect from the elegantly dressed pair. But it works nonetheless.

And of course with Astaire and Rogers being the stars, the main focus of Top Hat is the dancing. (This is where the famous "Cheek to Cheek" number comes from.) Being made in a time when the Great Depression was only just beginning, it provided audiences that escape they were looking for from reality.

Top Hat shows that sometimes the best remedy for the blues is a dose of Astaire and Rogers. (Hell, any musical, really.) Come to think of it, isn't that always a good remedy for when feeling down, seeking out a movie of a lighthearted nature? (From personal experience, it often works.)

My Rating: *****
Posted by MovieNut14 at 9:30:00 AM
Email ThisBlogThis!Share to TwitterShare to FacebookShare to Pinterest
Labels: 1930s, movies, reviews