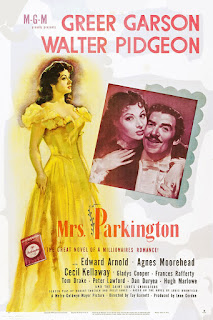 Nobody ever said that marriage was a solid institution. Indeed fiction often covers the supposed joys of matrimony, many times the bitter side of the union getting more of the spotlight. But more often than not, there aren't always bad days between spouses.

Tay Garnett's Mrs. Parkington focuses on such a stormy union, this one between the modest Susie (Greer Garson) and the temperamental Augustus (Walter Pidgeon). Told primarily through flashbacks, the film chronicles how she went from a maid in a boarding house to a society matron. (And after seeing how Augustus regularly behaves, it's an uphill battle for Susie.)

Similar to what Garnett would do two years later with The Postman Always Rings Twice, he shows with Mrs. Parkington the differences between the sexes. Susie is someone of humble means whereas Augustus will flaunt his wealth at any given opportunity. But over time Susie's influence rubs off onto her husband.

Being the third of their eight films together, Garson and Pidgeon unsurprisingly have strong chemistry. Also of note is Agnes Moorehead, who basically steals every scene she's in. Ah, the 1940s: where actresses were finally getting their due.

Mrs. Parkington overall is a familiar yarn of films from that era but the work from Garson, Pidgeon and Moorehead make it worth seeking out. (The two women being nominated for their performances also helps.) Because honestly, how often did actresses back then get roles that weren't reduced to the obligatory love interest?

My Rating: ****
Posted by MovieNut14 at 11:38:00 AM
Email ThisBlogThis!Share to TwitterShare to FacebookShare to Pinterest
Labels: 1940s, director: Tay Garnett, movies, reviews