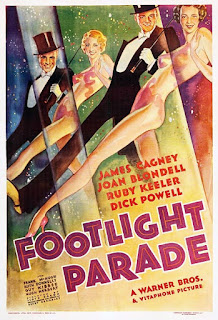 As the song goes, there's no business like show business like no business I know. And boy, Hollywood sure loves to proving that time and time again. It doesn't matter if it's the good, the bad or the ugly; the industry is just a feeding ground for material.

Lloyd Bacon's Footlight Parade follows Chester Kent (James Cagney) as he tries to eke out a living following the advent of talkies. This being during the Great Depression, it's a hard time for most everyone trying to make it. But will Chester be fortunate enough to do so?

Being a film with choreography by Busby Berkeley, Footlight Parade has those stunning musical numbers. (And Berkeley wasn't even the first choice for the job.) Anyway, when you see those intricate pieces, you almost forget that the United States was in the throes of financial ruin.

Bear in mind that Cagney only made his big break two years prior with The Public Enemy, and already he was being typecast in gangster roles. But as he would show with his other films that year (as well as his Oscar-winning role in Yankee Doodle Dandy nine years later), there was more to him than as the hoodlum with a temper that matched his height; the man had range.

Footlight Parade is a delight. The rapid-fire delivery from the actors -- Cagney and Joan Blondell in particular -- shows that they just don't make 'em like they used to. (Honestly, screenwriters should take notes from pre-Code titles.)

My Rating: ****
Posted by MovieNut14 at 9:29:00 AM
Email ThisBlogThis!Share to TwitterShare to FacebookShare to Pinterest
Labels: 1930s, director: Lloyd Bacon, movies, reviews