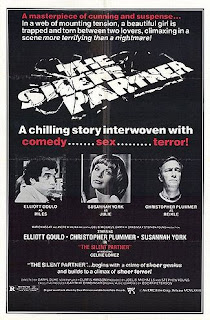 Usually with heist pictures, the primary focus is on the actual heist itself and only sometimes on the aftermath. Sure, there's nothing wrong with depicting the crime by its lonesome but what happens afterwards could be of interest too.

Daryl Duke's The Silent Partner provides an example of such. Yes, it does focus on the first few bungled attempts at robbing a bank but there's more to it as it unfolds. What Duke shows with his film is something more calculating.

No doubt that has something to do with the script by Curtis Hanson, who passed away this past September. As he would show with L.A. Confidential nearly twenty years later, he displays a deeply layered story of crime and deceit. Truly, we've lost an unsung great this year. (Well, one of several.)

Now onto the two performances of note from The Silent Partner: Elliott Gould and Christopher Plummer. Gould shows a cunning nature in his role. But it's Plummer who steals the whole show. (He is so not Captain von Trapp here.) It's unnerving stuff from the Canadian actor.

The Silent Partner may lose some of its steam by the third act but overall it's a taut piece of writing. The work from Gould and Plummer is proof as to why they're often held in high regard in the acting community. (Oh, and be sure to see this during the Christmas season.)

My Rating: ****1/2
Posted by MovieNut14 at 10:34:00 AM
Email ThisBlogThis!Share to TwitterShare to FacebookShare to Pinterest
Labels: 1970s, movies, reviews