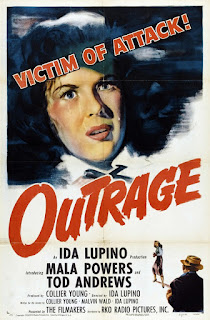 Life seems good for Ann Walton (Mala Powers) initially in Ida Lupino's Outrage. Recently engaged, she's happy with how things are going for her. But after she gets raped, she feels like those around her are judging her. How will Ann recover?

Unsurprisingly Outrage cause a little bit of the film's namesake upon its release. It being the second film at the time to have rape as its main topic (the first being Johnny Belinda), it sure as hell doesn't sugarcoat the matter. (With a woman at the helm, that's even more clear.)

And Lupino completely avoids any form of victim blaming towards Ann, who's treated with sympathy by those that know her. (Any type of disgust for what happened is directed towards her attacker.) But even with condolences, Ann still feels like she's being judged.

Even after she runs away, Ann finds some difficulty in regaining order in her life. Again, she's met with sympathy by the people she encounters (but not generally everyone). But slowly she gets a new perspective on the world she's a part of. (Her eyes do lose that spark of innocence.) It's a tough road for Ann to go down, yes, but no one ever said life itself would be without its problems.

Outrage continues to show what Lupino could depict both as a woman and a director. (How many directors -- male or female -- focus on the matter of assault outside of shock value and cheap drama?) As she showed a few years later with The Bigamist, Lupino showed that she was interested in subject matter that no one at the time would touch with a ten-foot pole. (Clearly her career as a director should be held in higher regard.)

My Rating: ****
Posted by MovieNut14 at 11:24:00 AM
Email ThisBlogThis!Share to TwitterShare to FacebookShare to Pinterest
Labels: 1950s, directed by women, director: Ida Lupino, movies, reviews