It's Love I'm After 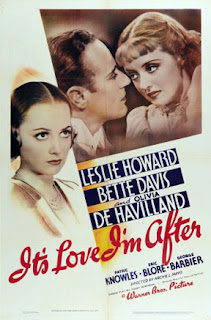 The opening scene of Archie Mayo's It's Love I'm After has Basil Underwood (Leslie Howard) and Joyce Arden (Bette Davis) performing the final scene of Romeo and Juliet. Between lines of passion, they mutter insults under their breaths. All while the audience -- which includes infatuated heiress Marcia West (Olivia de Havilland) -- remain unaware.

That said, Basil and Joyce are crazy for one another. (Suffice to say this is much more amusing if you've seen Howard and Davis in Of Human Bondage beforehand.) They plan to get married for the umpteenth time but Basil gets whisked away at the very last minute. And it has something to do with Marcia.

Reuniting with Howard and Davis a year after The Petrified Forest, Mayo gets these two otherwise serious actors to loosen up. (Certainly not usual fare for them or de Havilland, that's for sure.) And considering some of the roles in the actors' futures (Gone with the Wind for Howard and de Havilland, many roles of note for Davis), it's a nice change of pace. Suffice to say none of them would hit this comedic peak again.

And again, screwball comedy sounds like the very last thing any of its lead actors would try to conquer. But considering the collective sixteen Oscar nominations between the three of them, they obviously had talent. Sometimes it takes the right director to utilize all of that talent.

It's Love I'm After is a riot to watch, especially considering the names attached to it. It also shows how Hollywood's foray into comedy was often better whilst under the Hays Code. (One can only stand so many lewd jokes in contemporary titles.)

My Rating: *****
Posted by MovieNut14 at 9:59:00 AM
Email ThisBlogThis!Share to TwitterShare to FacebookShare to Pinterest
Labels: 1930s, director: Archie Mayo, movies, reviews