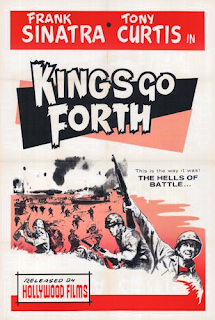 The usual formula for Hollywood fare back in the 1950s often followed these elements: get a couple of big names in top billing, have a nice blend of action and romance, and keep it all under two hours. (The latter is ignored when epics are involved.) Seriously, randomly pick out five titles from the decade, and at least three of them fall under this type of picture.

Delmar Daves' Kings Go Forth ticks off every box. It has a story told many times before (two men fighting over a woman) but does it manage to stand out from similar works? (It's also set during World War II, another common setting amongst films at the time.)

Amongst its top-billed stars are Frank Sinatra, Tony Curtis and Natalie Wood, all of whom had established themselves as serious actors in previous years (Sinatra in From Here to Eternity, Curtis in Sweet Smell of Success, Wood in Rebel Without a Cause). Though here in Kings Go Forth, they don't really have much to do here. (A paycheck project for one or all three of them, perhaps?)

But a major theme throughout Kings Go Forth is racism (Wood's character is of mixed race). But the film is more interested in the romantic rivalry at hand than any form of social commentary. (At least Curtis did The Defiant Ones the same year.)

Kings Go Forth is more or less the expected fare of the time, requiring its location to be exotic and its actors to look impeccable. Substance-wise the film doesn't have much to offer but still, it's a good enough escape from reality. (Hey, it had tough competition that year.)

My Rating: ***1/2
Posted by MovieNut14 at 9:53:00 AM
Email ThisBlogThis!Share to TwitterShare to FacebookShare to Pinterest
Labels: 1950s, director: Delmar Daves, movies, reviews