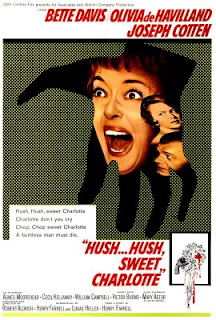 Following the success of What Ever Happened to Baby Jane?, Robert Aldrich and Bette Davis re-teamed two years later for Hush...Hush, Sweet Charlotte. (Joan Crawford was originally cast but was replaced by Olivia de Havilland.) But how does it compare to the more famous title?

Hush...Hush, Sweet Charlotte is more sinister than the earlier film in spots. But instead of Davis as the abuser, here she's the victim. (It is strange to see her in a more helpless situation.) However, her Charlotte Hollis has a shared trait with Jane Hudson: vainly grasping at days passed.

In fact, there are several connecting factors between Aldrich's two films besides their leading lady. Both What Ever Happened to Baby Jane? and Hush...Hush, Sweet Charlotte recruit actors whose careers may not have been what they once were. (Okay, Agnes Moorehead being the sole exception because of Bewitched.) Perhaps that started the trend of star-studded pictures the following decade?

Back to that aspect mentioned earlier. Both Charlotte and Jane try to reclaim the past while at the same time slowly lose their grip on reality. (While Jane wants to be in the spotlight once more, Charlotte yearns for the days before her lover was brutally murdered.) But life just throws many curveballs at both of them.

Hush...Hush, Sweet Charlotte shows that sometimes the best kind of horror doesn't always require blood, guts and gore to make it work. A little bit of gaslighting works just as well too. (Man, imagine how much more terrifying it would've been had Davis and de Havilland swapped roles?)

My Rating: ****1/2
Posted by MovieNut14 at 11:20:00 AM
Email ThisBlogThis!Share to TwitterShare to FacebookShare to Pinterest
Labels: 1960s, director: Robert Aldrich, movies, reviews