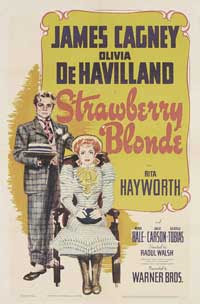 When one watches Raoul Walsh's The Strawberry Blonde, it could be a shock to those familiar with his other collaborations with James Cagney like The Roaring Twenties or White Heat. (Or for that matter, any of Cagney's other gangster pictures.) After all, this is a lighthearted affair, a far cry from the guns a-blazin' found in both men's more famous productions.

So what is The Strawberry Blonde about? Set towards the end of the 19th century, the film follows Biff Grimes (Cagney) as he and his friend Hugo Barnstead (Jack Carson) try to romance Virginia Brush (Rita Hayworth), the titular strawberry blonde. But there's more to the film than that.

Of course the opening sequence shows that Biff eventually settles down with Amy Lind (Olivia de Havilland) but again, that's not the whole point of The Strawberry Blonde. The point of the film is that when you find that one person in your life, everything just seems to click afterwards.

And as is the case with any good film, the cast of The Strawberry Blonde is great. All four of the main actors were either coming off of or about to do the most prolific film of their careers (Cagney Yankee Doodle Dandy, Carson Mildred Pierce, Hayworth Gilda, de Havilland Gone with the Wind). That may be the reason for why The Strawberry Blonde has gotten lost in the shuffle of the many films of the 1940s.

The Strawberry Blonde is an utter delight. It's one of those films that'll bring a smile to your face throughout. (And Cagney would do it again the following year with Yankee Doodle Dandy.) It's just something you need to see for yourself.