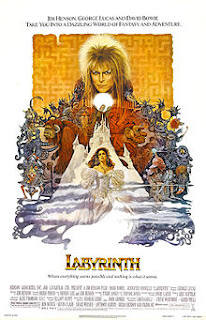 You know how some movies were clearly made during a particular decade? Not because of certain technology used throughout or certain ideas the characters express. Just the general mood and ambiance of a specific title practically scream it was made within that specific era.

And boy, is that the case with Jim Henson's Labyrinth. It's probably the most 80s-looking film outside of Working Girl. (And that's saying a lot, mind you.) Sceneries strewn with glitter, a synthesizer-heavy soundtrack by David Bowie (his appearance is a whole category in of itself), sets made on the (relatively) cheap...just things of that nature.

Of course with this being a work of Henson's, the main attraction of Labyrinth isn't just Bowie (and his package) but also the many creatures in this world. After all, this is from the man responsible for Sesame Street and The Muppets so of course these creatures will bring some marvel to the viewers. (Eat your heart, CGI.)

And yes, while certain elements of Labyrinth now show their age, it's still a film that provides some amusement. Granted, both Bowie and Jennifer Connelly have since disowned their involvement in it but surely they must've held some regard for it in later years. (Okay, maybe not but who knows?)

Labyrinth is just straight-up silliness a good majority of the time but again it's an amusing silly. (That's 80s fare for you.) It's nothing deeply remarkable but it's good if you're looking for something to get your mind off your troubles.

My Rating: ****
Posted by MovieNut14 at 7:44:00 PM
Email ThisBlogThis!Share to TwitterShare to FacebookShare to Pinterest
Labels: 1980s, movies, reviews