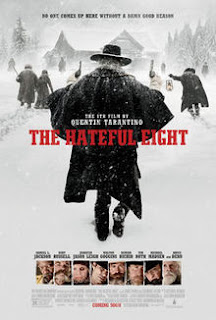 Over the last twenty years or so, Quentin Tarantino has been a popular name to numerous moviegoers. Of course, the violent aspect of his films (as well as certain choices of word uses) tend to bring controversy. Though sometimes it's because of said controversy that makes it easier to discuss his films.

His latest work The Hateful Eight isn't immune to controversy either but again it helps with discussing it. Yes, there's gratuitous bloodshed. Yes, there's outdated language that your elders might've used. But there's a certain style to all of it.

There's an ambiance to The Hateful Eight that's reminiscent of some of Sergio Leone's films, right down to the score by Ennio Morricone. But there's an element more reminiscent of Sam Peckinpah's The Wild Bunch. (Doesn't take a genius to figure out what that element is.)

Tarantino recruits a number of actors he's worked with before and a few he hasn't. All of them pull their weight with Tarantino's sometimes overindulgent script, especially Jennifer Jason Leigh and Walter Goggins. (Also Tim Roth is a riot during his early scenes.)

The Hateful Eight isn't Tarantino's best film but it isn't his worst either. There are several moments where it feels like as he's getting off on the gruesome violence. (And that's saying a lot considering his other films.) If it was just a touch shorter, maybe it might be held in better regard.