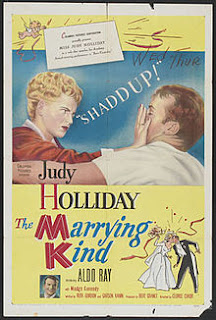 George Cukor's The Marrying Kind opens with Florence (Judy Holliday) and Chet Keefer (Aldo Ray) trying to get a divorce. The judge wants them to tell the story of their marriage to see where it went wrong. What follows is a glimpse into the average American union.

The Marrying Kind is darker in comparison to Adam's Rib or Born Yesterday. (Granted, Adam's Rib focuses on a shooting but the point still stands.) After all, this one's hinging on a potential divorce, and divorce wasn't exactly an approved of decision back in the early 1950s.

Anyway, The Marrying Kind is a step away from Cukor's usual fare like The Women or Camille. Cukor is known for various films with women at the helm, the kind with a touch of feminism in them too. With The Marrying Kind, he shows both sides of the same story.

Holliday (who had won an Oscar for Born Yesterday the year before) and Ray (who was relatively new to Hollywood at the time) play off each other with ease. With her sharp New York accent and his husky voice, they show (as is frequently depicted in movies) that opposites attract.

The Marrying Kind is good but in comparison to Cukor's earlier films with Holliday, it's lacking something. Granted, there were many other big titles from that same year (Singin' in the Rain and High Noon to name a few) but this is a title that's worthy of a look at least.