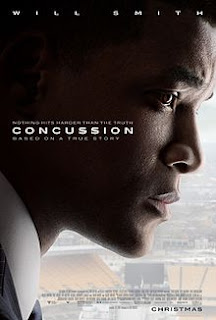 Frequently we get films and TV shows involving someone discovering a conspiracy. All the President's Men, State of Play (the British mini-series, that is), The Insider...many times such works focus on what the government is hiding. But what if it's a more supposedly harmless corporation doing the hiding?

Peter Landesman's Concussion focuses on the National Football League's cover-up of the injuries numerous football players have endured on the field. What's revealed could easily put a major damper on one of the biggest sports around. (It's almost a shock that it hasn't.)

Even if one isn't too big on football (or sports in general), Concussion could be of interest to anyone. It does focused more on the medical side of the story, the result of numerous hard blows to the head. Granted, it only glimpses at how such injuries affect the victims and those close to them. (A film can only show so much without scaring its audience away.)

Admittedly this isn't one of Will Smith's strongest performances but he does try his best here. He, along with Gugu Mbatha-Raw, have proven in the past their capabilities as actors. But the thin script puts them in a confined position with what they can do.

Concussion all in all is fine but when it comes to elements outside of the plot, it leaves a lot to be desired. Yes, Smith and Mbatha-Raw do manage to salvage it but just barely. It's certainly a title you can wait to see.

My Rating: ****
Posted by MovieNut14 at 5:05:00 PM
Email ThisBlogThis!Share to TwitterShare to FacebookShare to Pinterest
Labels: 2010s, movies, reviews