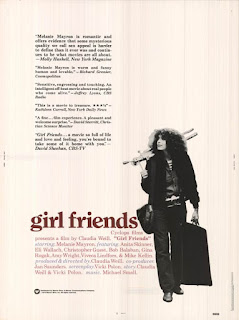 Claudia Weill's Girlfriends is the kind of film that got lost amid the numerous (male-driven) titles of the decade. After all, it was released the same year as The Deer Hunter and Midnight Express. (Then again, An Unmarried Woman and Halloween also hit theaters that year.)

And again, this was made during a time when women were coming into their own and becoming independent. Before that time, women were expected to settle down, run the household and nothing else. Then women's lib came around, and thankfully everything changed.

And Girlfriends was also made during a time when independent film was on the rise. Thanks to John Cassavetes' contributions in the previous years, it proved that the big studios with their recycled scripts and A-list stars weren't the only ones capable of making successful films.

Girlfriends has a great lead performance from Melanie Mayron. It's not a performance filled with emotional outbursts or big speeches. It's one that simply has her living her own life. (More roles like this for actresses, please.)

Girlfriends proves that this is the kind of film that a young someone should see when they don't know what to do with their lives. It shows that you don't need to have your life all sorted out by the time you're in your twenties. Just appreciate the moment.

My Rating: ****1/2
Posted by MovieNut14 at 10:22:00 AM
Email ThisBlogThis!Share to TwitterShare to FacebookShare to Pinterest
Labels: 1970s, directed by women, movies, reviews