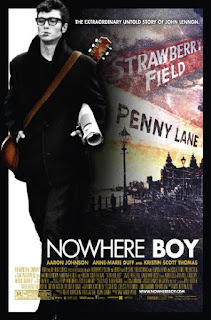 Every now and then we get biopics that focus on the sordid details of a famous person's life. Infidelities, abuse of all sorts, and numerous details that they want the public not to know. Though sometimes these biopics focus on their lives before they became famous.

Such is the case with Sam Taylor-Wood's Nowhere Boy. Revolving around the life of John Lennon before his days with the Beatles, the film depicts his life as a misfit from Liverpool. Taylor-Wood depicts the future music legend as impatient with his life early on and striving to change it.

As anyone with a decent grasp on music of the last century knows, the Beatles were basically responsible for one of the biggest movements in the music industry. Had it not been for this quartet of Liverpudlian blokes, who knows what the state of the music world would be like? (More than likely boring knowing the number of musicians inspired by the Fab Four.)

Back to Nowhere Boy. Starring as Lennon is Aaron Taylor-Johnson, whose career since this has been met with mixed reception. But here he shows the promise normally found in young actors with that extra charisma usually absent in others. (Now if only his career would get back on that promising track...)

Anyway, Nowhere Boy isn't anything too groundbreaking but much like what Anton Corbijn did with Control a few years previous, Taylor-Wood uses her photographer eye to keenly capture the tumultuous private life of a famous musician whose life ended at a young age. (Hopefully Taylor-Wood's career will thrive more now that she's moved on from Fifty Shades of Grey.)

My Rating: ****
Posted by MovieNut14 at 9:47:00 PM
Email ThisBlogThis!Share to TwitterShare to FacebookShare to Pinterest
Labels: 2000s, directed by women, movies, reviews