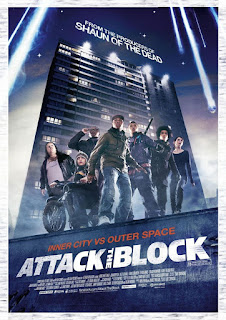 Joe Cornish's Attack the Block opens on Guy Fawkes Night, a time for those in London to revel in the celebrations of when the British government was almost overthrown. It's a time of fireworks and chaos. What better time for aliens to invade?

Okay, odd premise, granted, but Attack the Block is better than it sounds. It's not your typical alien invasion picture like The Day the Earth Stood Still or War of the Worlds. (And no, it's not a blatant reference to the current crisis going on in the world.) It's way creepier than that in spots.

Attack the Block is also reminiscent of Shaun of the Dead a good majority of the time as well. Both films don't rely on those with certain abilities to save the day. They instead have everyday people fighting the supernatural beings. (Who says you need to know martial arts in order to kick ass?)

Though Cornish hasn't been getting more recognition following Attack the Block, thankfully one of its stars has in recent months; And it's somewhat obvious that it's thanks to this film which earned John Boyega notice from the producers of Star Wars: The Force Awakens. (Hopefully Cornish will encounter this in the near future.)

Attack the Block is a fun little sci-fi picture. It shows that, like the original (and perhaps even the latest) Star Wars, big-name stars aren't generally needed for something like this. You just need actors that can get the job done.

My Rating: ****
Posted by MovieNut14 at 11:02:00 PM
Email ThisBlogThis!Share to TwitterShare to FacebookShare to Pinterest
Labels: 2010s, movies, reviews