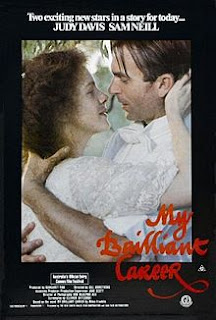 Early on in Gillian Armstrong's My Brilliant Career, our protagonist Sybylla Melvyn (Judy Davis) shows no interest in a domestic life, something her family expects of her. She instead yearns for an independent life as a writer. But this is the late 19th century; it would be some time before society allowed women to express themselves.

Unsurprisingly, Sybylla's family is aghast by her free-spirited nature and they're determined to tame her. It's of limited success and offers of marriage practically repulse Sybylla. But will her opinions change when Harry Beecham (Sam Neill) enters her life?

Much like how Miles Franklin's novel was released at the beginning of the suffragette movement, My Brilliant Career was released at a time of screen feminism. Released the year after Girlfriends and An Unmarried Woman, it shows a woman living her life beyond the kitchen. (Once again, we need more films of this nature.)

Like Sense and Sensibility years later, My Brilliant Career has (then) modern-day feminism against a backdrop of the past. Indeed the feminist ideas of when the films were made and when they were set are different in some regards but the point is that feminism is not a new concept; it's literally something that's been around for generations.

Anyway, My Brilliant Career is a very well done film. Thanks to Armstrong's direction and Davis' performance, they show that women, regardless of age or era, strive for an identity of their own. Even if there's something in their way, they manage to persevere.

My Rating: ****1/2
Posted by MovieNut14 at 10:29:00 PM
Email ThisBlogThis!Share to TwitterShare to FacebookShare to Pinterest
Labels: 1970s, directed by women, movies, reviews