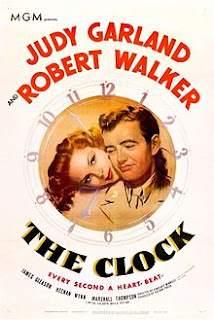 Vincente Minnelli's The Clock opens with Cpl. Joe Allen (Robert Walker) walking out of Grand Central Station and into the wonders of New York City. It's within this moment that establishes Joe's character, one of shyness and naivete. (Certainly a far cry from Walker's best-known role in Strangers on a Train.)

Shortly after this, he meets Alice Maybery (Judy Garland). She shows him the sights and they start to warm up to each other. What ensues is practically a precursor for Before Sunrise (and perhaps its two sequels).

Nowadays The Clock is viewed as lesser-known from the director and its leading lady. Minnelli and Garland's legacies are firmly cemented in the musical genre. (Their previous collaboration was Meet Me in St. Louis.) Thankfully The Clock proves that they were more than capable of doing other genres than the one that immortalized them.

Even though The Clock is a lighthearted drama, the antics during production were anything but. As well as rekindling her romance with Minnelli (they were engaged by production's end), Garland became addicted to the prescription drugs the studio provided her. Walker in turn started drinking after finding out about his wife Jennifer Jones' affair with David O. Selznick. Despite all these personal woes, they managed to persevere like the professionals that they are.

The Clock is a very lovely little film. The chemistry between Walker and Garland is great (such a shame both died young from their vices), and it's definitely the kind of film everyone needed back then to fend off the worries of the soon-to-be-over war. It's certainly one that needs to be seen.