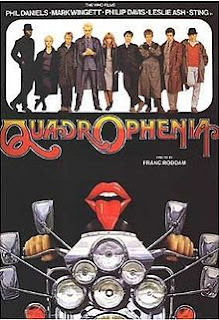 It's obvious the moment Franc Roddam's Quadrophenia starts that it's going to be one hell of a ride. Not on the same level as Tommy four years prior but certainly on the same magnitude as Ken Russell's film. Yes, both films are based on albums by the Who but both have completely different (and unique) stories to tell.

Tommy was about the titular deaf, dumb, blind kid that can play a mean pinball. So what's Quadrophenia about? A more simple plot this time around: set during the height of the Swinging 60s, it chronicles a young mod's everyday life as he pops pills, rides his scooter around, and tries to make sense of everything.

Bear in mind this was the era the Who became one of the biggest names in the music industry so it makes sense they would make an album to honor that era in the United Kingdom. But how well does Roddam capture that wonderful and wild time that the band knew best? Even though that era had long since ended (this was made during the late 70s after all), it's one that's revitalized.

It's not often that an entire era is brought back to life effortlessly. But Roddam depicts the mod subculture without a hitch as the era of Thatcher looms. It makes one wish that they could not only re-live that time in history (which did happen as a result of the film) but also live in the film itself.

Quadrophenia is practically the cinematic (and rock and roll) equivalent of The Catcher in the Rye. It captures the cynical nature of youth, the kind only a few fully get. And to think this film almost got cancelled because of the sudden (but not entirely unexpected) death of Keith Moon, the Who's drummer. (But as the saying goes, the show must go on.)

My Rating: *****
Posted by MovieNut14 at 9:53:00 PM
Email ThisBlogThis!Share to TwitterShare to FacebookShare to Pinterest
Labels: 1970s, movies, reviews