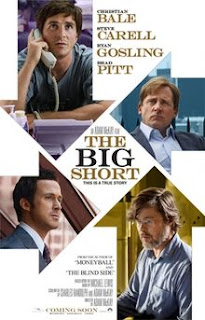 The world we're a part of is not a perfect one. Far from it. It's one filled with corruption, unsavory people and flawed systems. That said, glimpses of this mangled society could provide some decent entertainment from a fictional standpoint.

Adam McKay's The Big Short depicts the years leading up to the housing market crash in 2008. From the perspective of several hedge fund managers, traders and investors, the film chronicles them as they watch the economy they know slowly implode.

This is a departure from McKay's earlier work like Anchorman and Talladega Nights. However, it does maintain a comedic air in some scenes. (Particularly the scenes that explain business jargon to the audience.) But overall McKay shows that he's capable of making more mature works. (And that's saying a lot.)

Apparently The Big Short is mature enough to attract the likes of several actors who recently were graced by the voters of AMPAS. Though Christian Bale has been the one getting all of the acclaim (for reasons only the various award voters know), the best of The Big Short are easily Steve Carell and Ryan Gosling. (Though a smaller role, Brad Pitt is also very good.)

The Big Short is good though there are some elements that are distracting. The editing, for instance, is sporadic and immensely choppy. (It might work for some but it may give others a headache.) And maybe -- just maybe -- the business jargon could've been dumbed down a bit for those who don't play the stock market.

My Rating: ****
Posted by MovieNut14 at 10:03:00 AM
Email ThisBlogThis!Share to TwitterShare to FacebookShare to Pinterest
Labels: 2010s, movies, reviews