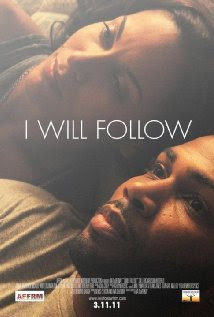 Within the last year or so, Ava DuVernay has gotten her moment in the spotlight. Mainly because of the acclaim Selma received (and the lack of an Oscar nomination on her part) but also from her advocating other female directors. And she herself has been on the circuit for only a few years now.

Her second film I Will Follow hints what would be coming from the director. Revolving around a woman coping with the death of her aunt, DuVernay depicts living with grief and trying to piece together a possible future.

Like Selma years later, I Will Follow shows a variety of characters with varying personalities. DuVernay shows that people are of different tempers and patience, how no two people are alike on an emotional level. (Honestly, fiction tends to get that wrong frequently.)

I Will Follow also tackles the delicate subject of grieving, a subject fiction frequently indulges in. Everyone grieves differently when it comes to the loss of someone close. Some wear the emotions on their sleeve while others keep themselves composed. It's something we'll all endure at least once in our lives.

I Will Follow is good but in comparison with Selma, it's missing that extra je ne sais quoi. Had it been perhaps just a touch longer, maybe it might be held in higher regard. But instead it's just a fairly decent film. (That said, it does show DuVernay's future potential.)

My Rating: ****
Posted by MovieNut14 at 9:52:00 PM
Email ThisBlogThis!Share to TwitterShare to FacebookShare to Pinterest
Labels: 2010s, directed by women, movies, reviews