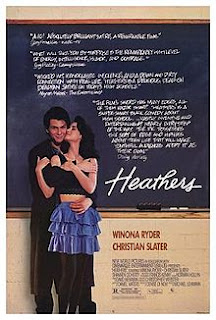 In the early scenes of Michael Lehmann's Heathers, the film appears to be a darker spiritual predecessor to Mean Girls. Bitchy high school girls, sharp-barbed jokes, the main character trying to be popular...it has all of the usual elements found in a teen comedy. That is, until J.D. (Christian Slater, channeling some serious Jack Nicholson vibes) enters the picture.

Both he and Veronica (Winona Ryder) soon develop an anarchy-fueled relationship of sorts. They kill a number of their peers and frame them as suicides. But how long will they get away with their crimes? And how much longer before they go too far?

Bear in mind that back when Heathers was released, the many dark elements were a warped form of comedy. But nowadays with teen suicides and school-related attacks making headlines at an alarming rate, Heathers becomes even darker in nature. There's absolutely no way in hell that this could get made today, especially as a comedy.

As mentioned earlier, Heathers is a very dark film. (It's certainly not your average John Hughes picture, that's for sure.) All of the later-uncomfortable elements aside, Daniel Waters' script has a wicked edge to it.

Heathers is the kind of film reserved nowadays for those with a really warped sense of humor. Sure, it's an accessible one but it'll more than likely alienate some of its viewers because of its content. (And honestly, there's a lot that probably made Lehmann and Waters cringe years later.)