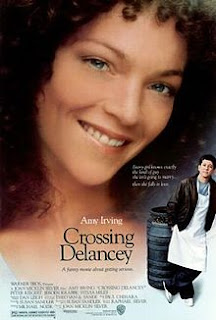 There's a moment early on in Joan Micklin Silver's Crossing Delancey where Isabelle "Izzy" Grossman (Amy Irving) is beckoned by dashing author Anton Maes (Jeroen Krabbé) at a party. Her eyes light up as she approaches him, possibly imagining a future with him...then he gives her his empty glass.

A later scene shows Izzy's grandmother (Reizl Boyzk) is trying to set her up through a matchmaker. (Izzy is not amused.) The matchmaker finds pickle vendor Sam Posner (Peter Riegert) but Izzy turns him down. But even as she starts seeing Anton, she can't entirely pass up Sam's charms.

Sure, a premise like that sounds like the same old song we've heard time and time again. But Crossing Delancey is thankfully a nice change of pace. It doesn't force Izzy to immediately choose between Anton or Sam. The film simply shows her living her own life as she wants to live it.

In a decade where rampant sexual appetites were everywhere from teen comedies to network television, it's practically a relief to get a film that doesn't rely on the physical act. Being released the same year as Working Girl, it also shows a woman's life far away from the domestic setting.

Crossing Delancey is a deeply charming film. Thanks to the work from Irivng and Riegert (who's also great in Local Hero), it depicts the budding romance that we so seldom get nowadays. Quite honestly, we need more films like this one.

My Rating: ****1/2
Posted by MovieNut14 at 10:26:00 AM
Email ThisBlogThis!Share to TwitterShare to FacebookShare to Pinterest
Labels: 1980s, directed by women, director: Joan Micklin Silver, movies, reviews