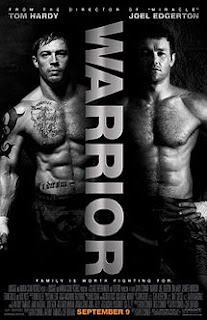 Gavin O'Connor's Warrior is both similar and different from other films about martial arts. On the one hand, it shows the fighter as someone with a bad life outside of the ring. But on the other hand, Warrior is more emotionally involved than those other films.

And the characters prove it. Tommy (Tom Hardy) is closed off from the people around him. Brendan (Joel Edgerton) struggles with money problems. Their father Paddy (Nick Nolte) tries to reconnect with his sons to no avail.

Of course O'Connor chooses the right actors to play these parts. Hardy, who has really made a name for himself these last few years, displays a quiet impact in his role. Edgerton does much of the same. Nolte, the more experienced of the three, shows a weathered nature in his part.

There's a peculiarity in the fighting styles of the brothers. Tommy fights his opponents in a brutal manner, possibly as if he's letting out some inner anger. Brendan, who was a fighter before settling into a domestic life, is only doing it again for some extra cash. He's sort of more of a punching bag in comparison to Tommy's punching machine.

You know how I said every year hidden gems are released? Well, that's exactly what Warrior is. In fact, it's probably one of the best films from last year. Hardy, Edgerton and Nolte are just fantastic. Be sure to check this out, preferably soon.

My Rating: *****
Posted by MovieNut14 at 7:30:00 PM
Email ThisBlogThis!Share to TwitterShare to FacebookShare to Pinterest
Labels: 2010s, movies, reviews