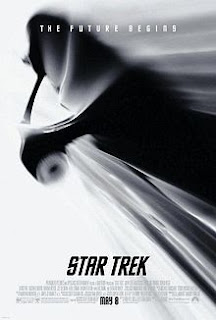 I'll admit it: sometimes I'm a geek. (It doesn't restrict to film in general.) Okay, not that much of a geek, but I am one.

Now in regards to the immensely popular franchise Gene Roddenberry created so many years ago, I'm only faintly familiar with it. (The only episode I saw was "The Trouble with Tribbles".) So I figured, what the hell, I'll watch J.J. Abrams' film anyway.

It turned out to be better than I thought it would be. (And this is coming from someone who's not much for sci-fi.) It's even more interesting considering the bad rap Abrams sometimes gets. (Lens flares, anyone?) That didn't really stop me from liking it however.

The cast is great. Chris Pine captures the cockiness of Han Solo yet stays true to William Shatner's original portrayal of Capt. Kirk. Zachary Quinto shows that Spock has a vulnerable heart beating under that cold shell of a body. The supporting cast of Karl Urban, Zoe Saldana, John Cho and Anton Yelchin provide amusing moments throughout. Eric Bana excellently displays the ruthlessness of his villain. But my favorite was Simon Pegg because you have to love his British silliness. (Added bonuses: Leonard Nimoy cameo, Chris Hemsworth as Kirk's father, Winona Ryder as Spock's mother.)

Star Trek is perhaps one of the best sci-fi films of the last ten years. Nothing feels overwhelming, not even those infamous lens flares of Abrams'. Basically, I just loved it. Bring on the sequel!

My Rating: *****
Posted by MovieNut14 at 10:29:00 PM
Email ThisBlogThis!Share to TwitterShare to FacebookShare to Pinterest
Labels: 2000s, movies, reviews