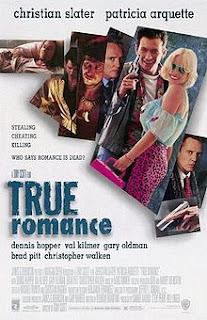 You gotta love it when certain names in Hollywood have a very distinctive style. It makes them recognizable.

Now Quentin Tarantino has possibly the most distinct style in Hollywood in the last twenty years. Even during the opening credits of Tony Scott's True Romance (which he scripted), his style is just oozing out. Though because Tarantino wasn't the director of the film, his manic filmmaking is visibly absent. Thankfully Scott keeps the script's insanity intact.

The way Christian Slater (who, let's be honest, is playing Tarantino) and Patricia Arquette play Clarence and Alabama isn't exactly like Romeo and Juliet or Bonnie and Clyde. To be honest, their relationship is more Sid and Nancy than anything else. Not in the sense that they're self destructive, but rather they're an unlikely couple who happened to cross paths one day.

And like most films whose origins come from the depths of Tarantino's possibly disturbed mind, the supporting cast is fantastic. Among the names are Dennis Hopper, Christopher Walken, Gary Oldman, Brad Pitt and James Gandolfini. Each provide an interesting light to their characters, Oldman and Pitt especially.

True Romance has to be the most insane film in existence. (Or at least at the moment.) Scott's slick directing keeps it from getting too insane, even though said insanity seeps out pretty easily. Still, I personally look forward to future re-watches.